This article is also available in video form on Youtube.

Hi, I’m Marian, a Psychology/Neuroscience Researcher at the LMU Munich in Germany specializing in the topic of visual attention. I have personally used all methods described below. With its tagline “almost magic”, the ELF emmit sounds promising, indeed. Accordig to their website, it can be used to “Improve focus, sleep, meditation and learning processes, while combating stress by combining ancient traditions and modern technology.”

How the EE works

“ELF emmit draws upon the medical knowledge of the frequencies at which our brain works in different states of mind and encourages them to function at those exact frequencies.” So it encourages the ‘states of mind’ to work in different frequencies? I’m not sure. Generally, it is correct that if we measure brain waves, for example with electroencephalography, we find different types of frequency waves. When we are awake and alert, beta waves (13 – 30 Hz) dominate, when we get drowsy, more and more alpha waves (8 – 13 Hz) appear.

Why their “science” is false

The Elf emmit team seems to think that if we send waves at certain frequencies to the brain, it will prduce waves at similar frequencies. Thus, if we induce frequencies that are associated with being awake, we will be awake and so on. However, the Frequency Following Response has almost nothing to do with the brain (as an organism) completely syncing its brain waves to input signal frequencies with similar brain frequencies. The FFR describes the encoding of a complex auditory stimulus (i.e. speech sounds or tones) in a very specific area of the brain, namely the brainstem. The FFR is used in research to test what changes when we are hearing impaired. Their scientific explanation does not apply to the EE’s simple simple low-frequency non-hearable signals, but only complex auditory signals. 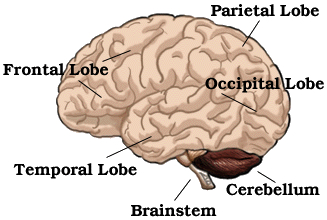 They want to stimulate the cerebellum because they say it “controls our body functions and is a link between our brains and the rest of the body.” This is correct in the sense that the cerebellum’s main function is motor control (i.e. body movements). However, the EE is not aiming to change the precision of your arm movements but rather it wants to change your entire mental state. This is a higher-order mental process. And there is a completely different brain region consistently associated with almost exclusively higher-order functions: the prefrontal cortex (see frontal lobe in picture) which is on the opposite side of the brain from where the EE is worn. So they should not even stimulate the cerebellum in the first place but rather the prefrontal cortex (for a better chance at success at least).

Luckily enough, although they claim the EE stimulates the cerebellum, it really doesn’t. As can be seen from many ads on the website, the EE is worn slightly above the inion, which is the little bulge in the back of your skull). The inion has another name: external occipital protuberance. The name already gives away where it is located: not over the cerebellum but over the occipital lobe of the cerebrum. The occipital lobe is almost exclusively responsible for vision and the inion lies directly over the primary visual cortex. This is why locations around the inion are used by researches in combination with the similar but vastly more powerful transcranial magnetic stimulation (TMS) to make people see small light flashes. So, the most probable thing the EE does (if it does anything) is stimulating the primary visual cortex.

Why the EE is likely doing nothing with the brain

But even the EE stimulating the visual cortex is extremely unlikely as its power is likely too low. Not even TMS can stimulate areas that are deeper than 5 cm within the brain, despite “typical peak coil currents in the range of several kiloamps and discharge voltages of up to a few kilovolts“. The EE’s power is limited to around 1 microvolt because it relies on the mobile phone’s output. This is a gigantic difference in terms of signal strength. The EE produces magnetic fields of the magnitude of “220 micro Tesla [0,00022 Tesla], that is more than enough to make an impact on the body, especially on cerebellum,” as can be read on the EE website. Likely, that’s just not enough power. Just compare this with the 1 Tesla a TMS pulse usually produces. The EE is about 10 000 times weaker.

Some people say they get headaches from using the EE and use this as a reason to claim that the EE is at least changing something in the brain. However, the brain cannot feel pain, so the headache most likely comes from micro muscle movements in the skin right below the EE.

But even if the EE stimulated the correct area with enough strength to have the desired effect on the brain, (i.e. brain wave frequency changes), we still wouldn’t know whether it “does anything” because scientists are not even sure that brain waves cause anything. Brain waves might be just a simple by-product of our cognitive processes. There is some evidence for the former but we are far from being sure yet.

Taken together, this means that there is zero scientific basis for why the EE should function in the way it is advertised. The people who currently claim it works are probably falling for a placebo effect. But that’s not necessarily a bad thing because the relaxing or concentrating effect of using the EE is still real. It’s just not because of the device itself but rather the hopes and beliefs you attach to using it.

Please let me know what you would like to be tested. Just because they got almost every aspect of the science details wrong, doesn’t mean its impossible for it to work. It is just very very unlikely. What shall I test? I am planning to do a blind study with some test persons and see whether their subjective reports change based upon what mode is used. Also I would like to combine using the EE with recordings of electroencephalography to see whether actual changes in brain waves occur but since this is not trivial, I will need some further planning.